Of the near £16bn that is spent on advertising across the UK, digital is forecast to make up 50% of that spend for the first time in 2015. This includes all the other traditional forms of advertising TV, radio, cinema and more.  This is quite a staggering thought but isn’t overly surprising. It is the ability to target specific audiences that draw advertisers in. You can control where your ads appear, who they are appearing in front of and know exactly where your money is going.

The UK is becoming gadget obsessed with most households having at least one smartphone, tablet or computer between them. If not the entire family having at least one of the above. I never thought 10 years ago my parents would buy into technology and now I struggle to see either of them away from the iPad. Must be a sign of the times. As a result British people seem to be obsessed with the idea of online shopping and I myself am in love with the idea. The thought of being able to order something through my smartphone at 1pm on a Monday and it be delivered the next day by 9am is astonishing in itself and also very handy. 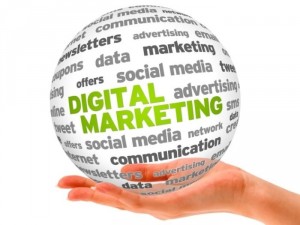 Firstly there is Bing/Yahoo Ads which takes about 8% of the remaining share and significantly more in the USA (20%).  We have found that while traffic levels are lower on Bing the quality of traffic being delivered is greater. We have also seen that there are significantly lower cost per clicks (CPC’s), allowing your money to go further.  There is also the growing benefit of using Facebook advertising which is set to top £700m next year as people look to take advantage of Facebook’s vast audience and ability to target specific segments of people.

There is also the ever-growing use of LinkedIn advertising as well which opens advertising up to another massive audience, which can easily be drilled down to specific target groups.

So as digital spend is on the increase it is not just in Google that a benefit can gained. There are several other avenues which can exploited depending on your business. It is important to pick the right platform for a specific business, so whether it just be Google Adwords or a combination of Bing, Facebook and LinkedIn there is a wide choice out there for you.

So if any of this gets you thinking, just get in touch and maybe we can help you find the perfect way to your customers online too.

Managing a diverse range of interesting accounts. A skilled communicator and great all round digital marketer.