This is the May 2015 Google Algorithm Weather Report, here you will find the latest news in the ever-changing world of SEO so you can keep on top of all the changes. This month we’re looking at doorway pages, ranking factor lists, Penguin & Panda, the Google/Twitter deal, Webmaster Tools, the “Phantom Update”, and Emojis!

Details on what Google defines as a Doorway Page.

Google went on to explain in a Webmaster Help thread exactly what a doorway page was defined as, and he says: “An example of doorways is when you have a website with 200 pages on it, all of which have the same basic text but with place names switched out on each page.”

Other uses stated that Mobile Friendly Design and Schema should be added to this list, which many webmasters and SEO’s will agree with.

John Mueller stated that they are “looking for ways to make Penguin and Panda a little bit faster to update data” in a recent Google+ Hangout after a frustrated webmaster queried him about the algorithm.
This isn’t new to anybody, as we heard the same thing back in September last year , but of course we will be keeping our eyes on this as best we can.

Google and Twitter renewed their search deal allowing tweets to be displayed in search results in real time, and we have now finally seen the first screenshots of the new (old?) feature. 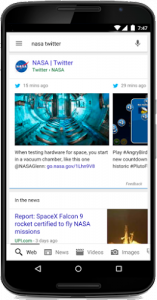 We can’t recreate this, as it seems to be a US-only feature right now, but we are confident it will be rolled out to UK SERP’s very soon.

Google has renamed ‘Google Webmaster Tools’ to ‘Google Search Console’ in a bid to not exclude non-webmasters, as the tool is also used by hobbyists, business owners, SEOs, marketers, programmers, designers, and app developers.
Functionally there is no difference between the old Webmaster Tools and Search console besides the branding.

Google: Yes, there was an update early this month.

Lots of webmasters and SEO’s noticed some movements at the very start of the month, dubbed the “phantom update”, but Google was denying that they had updated or refreshed anything until May 19th when Google’s John Mueller stated that it was ‘essentially just a normal algorithm update that we make all the time, and sometimes that is something that affects more sites.”

Emojis Live On In Google’s SERPS

Despite previous indications by Google that Emojis would be making an exit from Google’s search results, they continue to live on. Just when we will see the disappearance of the colourful characters is unknown at this time, as all Google have said is “soon they will not be shown at all”.