“What you missed while you were away”

As Twitter is a real time feed of posts it is pretty easy to miss something on your timeline while you’re not online. A lot can happen on twitter within a short space of time.

To fill in some of those gaps, Twitter is introducing something new to your home timeline: a recap of some of the top Tweets you might have missed from accounts you follow.

“While You Were Away,” is a big move by twitter and the first time the platform has ever shifted away from the real-time element that sets it apart from it’s competitors. Although it is not clear how Twitter select these ‘Best tweets you missed’ it is highly probable that it is based on user engagement.

New this month is Twitters change on character limits within Direct Messages. The official statement came from Product Manager, Sachin Agarwal who announced:

“We’ve done a lot to improve Direct Messages over the past year and have much more exciting work on the horizon. One change coming in July that we want to make you aware of now (and first!) is the removal of the 140 character limit in Direct Messages.”

This timely update comes after another recent update to Direct Messages which makes it possible for users to accepts Direct Messages from any other Twitter user without following them.

These two updates on the direct messages section of Twitter combined have the potential to change the way brands solve customer service issues on the platform.

This means Brands can accept Direct Messages from any of their 100’s or 1000’s of followers and now have the ability to send lengthy replies to remedy issues without escalating it to email. This is a big step forward on the customer service front.

Here’s how some of the twitter community feel about the changes:

Unlimited length DMs, eh? Kinda feel like 400 characters would’ve been good, just as a “if you go beyond this, it’s getting weird” reminder.

Twitter remove the 140 character limit from DMs, about to be whole novels and essays. Im sooo ready to laugh at screenshots. — MyNinjaTurtle (@MyNinjaTurtle) June 14, 2015

Twitter is going to remove the 140 character limit from DM’s in July. Awesome!

This is an interesting development and one that could potentially change Twitter’s entire trajectory as a company, definitely something to keep a close eye on!

Twitter and Google have renewed their “firehose” deal once again allowing Google access to Twitter’s stream of tweets. Google will index tweets as soon as they are posted and display them in SERPs alongside search results appearing for relevant queries.

This is not the first time we have seen this, as Google and Twitter both had this deal three and a half years ago only for Twitter to pull the plug. Google used the firehose for a service called Google Realtime Search, which pulled posts and data from various sources (Twitter, Myspace, Facebook fan pages, Google Buzz, Twitarmy, Identi.ca, Jaiku, Google News, Google Blogs, Quora, Friendfeed, Twitgoo, Me2day, Plixi, Gowolla, new web pages, and freshly updated web pages. (with twitter holding dominance over this list)) to display the absolute most relevant results to a query. This service disappeared overnight after Twitter dropped the deal.

The new search results utilising Twitter’s firehose has been spotted on mobile, the pictures below show how it will look once it has rolled out worldwide. 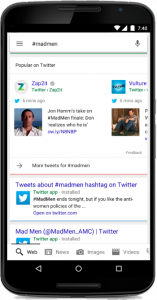 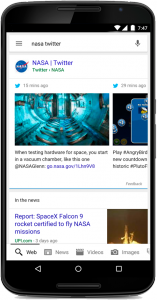 Enjoying a busy and full internship supporting our account managers in all aspects of delivery.